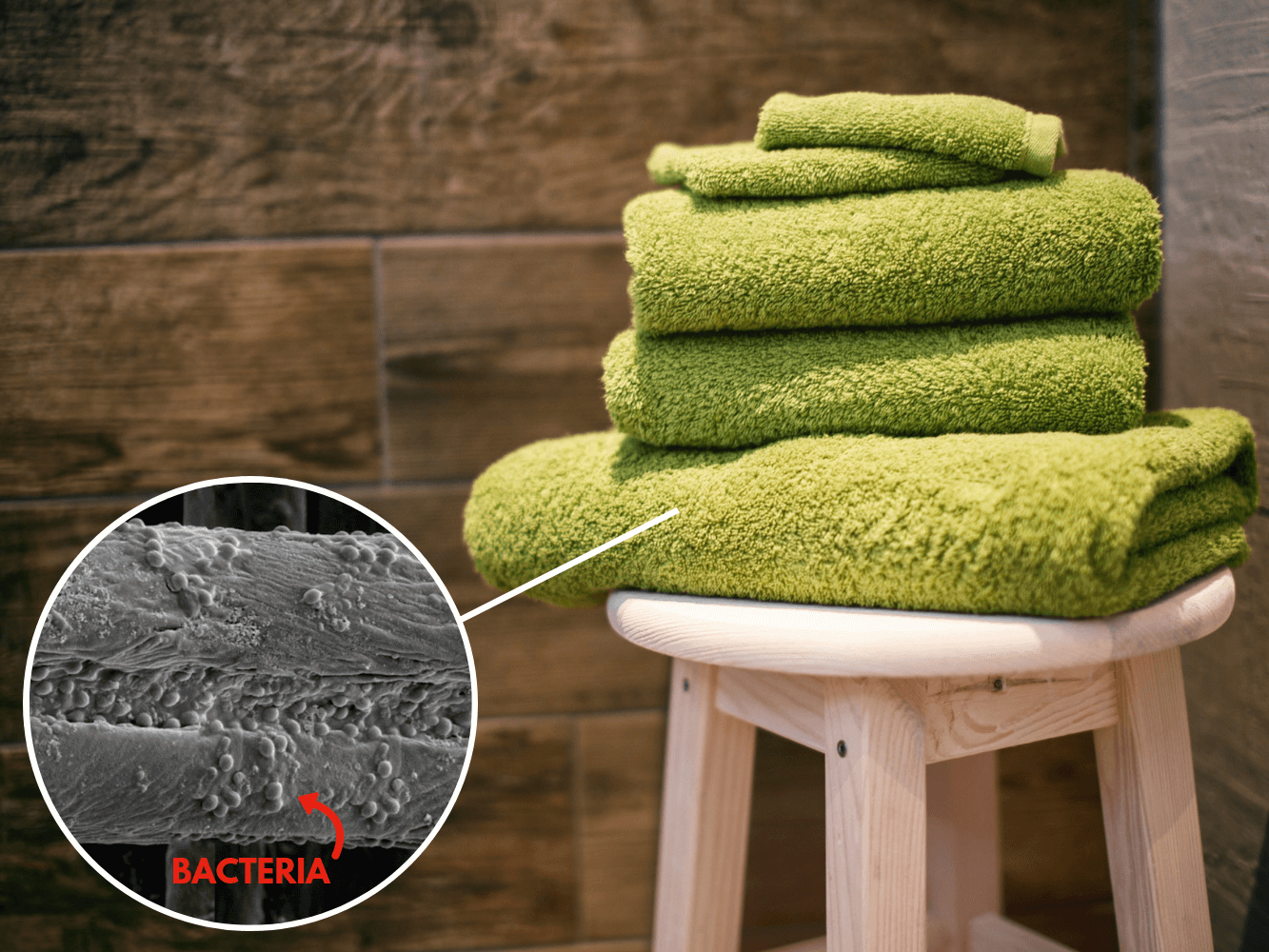 As soon as it’s used, a towel becomes covered with bacteria, fungi, and dead skin cells. The towels then provide the perfect environment for these microorganisms to thrive. They love to grow in wet, warm and dark environments.

By function, towels are designed to absorb water so we know they get wet. Combined with the fact that damp towels are stored in dark bathrooms, the bacteria will begin to grow rapidly.

As they start to multiply, the start to release odors leading to that suspicious musty smell.

But it’s not just the smell that’s the problem…

You can actually catch dangerous infections from dirty towels.

Dr. Gerba told time “After about two days, if you dry your face on a hand towel, you’re probably getting more E. Coli on your face than if you stuck your head in a toilet and flushed it.”

All these bacteria can lead to skin irritation, acne, and even make you sick.

So how do we get rid of this bacteria?

You’d need to wash your towels… but A LOT more than you probably do.

Dr. Gerba recommends washing your towels after 2 days of use, especially if there are children in the house.

So start prepping yourself for a lot more laundry, because if you are like the majority of people, your towel isn’t washed until it has been used at least 5 times.

However, this isn’t exactly great for your chore list or the environment.

So the best thing is to use a towel that self-sterilizes and kills bacteria on contact.

But is that even possible?!?

It’s been used for centuries to do just that. The ancient Egyptians used copper to make water jugs since it prevented any bacteria from growing in the drinking water. The element has also been used by the Greeks, Romans, and Aztecs to treat a variety of ailments.

Today, copper is being used in hospitals all over the world to prevent bacterial transmission. This superelement is replacing any stainless steel or silver plated components on a variety of surfaces – faucet handles, elevator buttons, IV poles, and more.

Now, you can utilize this same super element to go to work in your own bathroom.

Using ultra-sonic waves, copper can be infused directly into cotton threads and spun into towels. The towels then have the same bacteria-killing capabilities and prevent them from growing.

This means no more smells (ever!) and healthier skin overall.

The copper also extends the number of times a towel can be used before needing to be tossed in the hamper.

Want to make the switch? OURA Skincare towels can be found here.